NARA, Japan – Former Japanese Prime Minister Shinzo Abe is showing no vital signs after being shot Friday by a gunman in the western city of Nara while campaigning for the weekend’s House of Councillors election, a local emergency official said.

The country’s longest-serving leader was shot from behind at around 11:30 a.m. while he was speaking in front of Kintetsu Railway’s Yamato-Saidaiji Station, the police said, adding he collapsed to the ground after two shots were heard.

The 67-year-old, who was also the longtime leader of the ruling Liberal Democratic Party, was rushed to hospital with blood seen on his shirt. 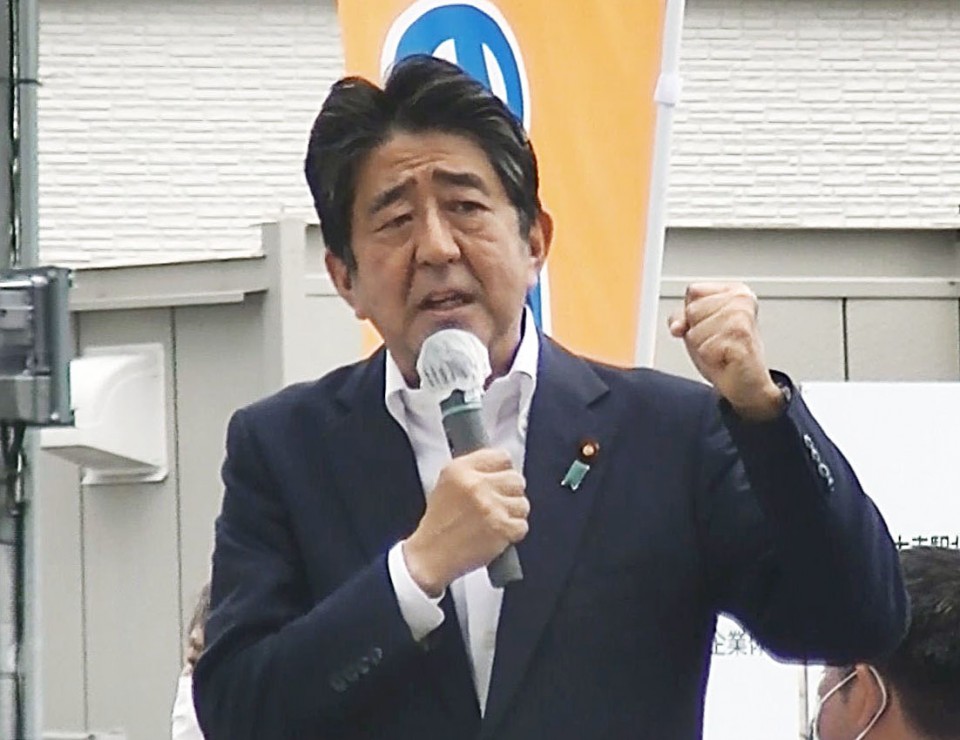 Image from video footage shows former Japanese Prime Minister Shinzo Abe delivering a stump speech in Nara on July 8, 2022, shortly before he was shot by a gunman. (Kyodo)

An LDP lawmaker said there is information that Abe was shot in the left side of his upper torso.

Tetsuya Yamagami, a 41-year-old resident of the western city, was arrested at the scene on suspicion of attempted murder, the police said. The suspect was formerly a member of the Maritime Self-Defense Force, according to government sources.

Abe was in the city to support an LDP candidate running in Sunday’s upper house election and there was a crowd of people listening to his speech near the railway station when the incident occurred.

A Kyodo News reporter at the scene saw a man silently approach Abe, who had been speaking for several minutes, before shooting him. 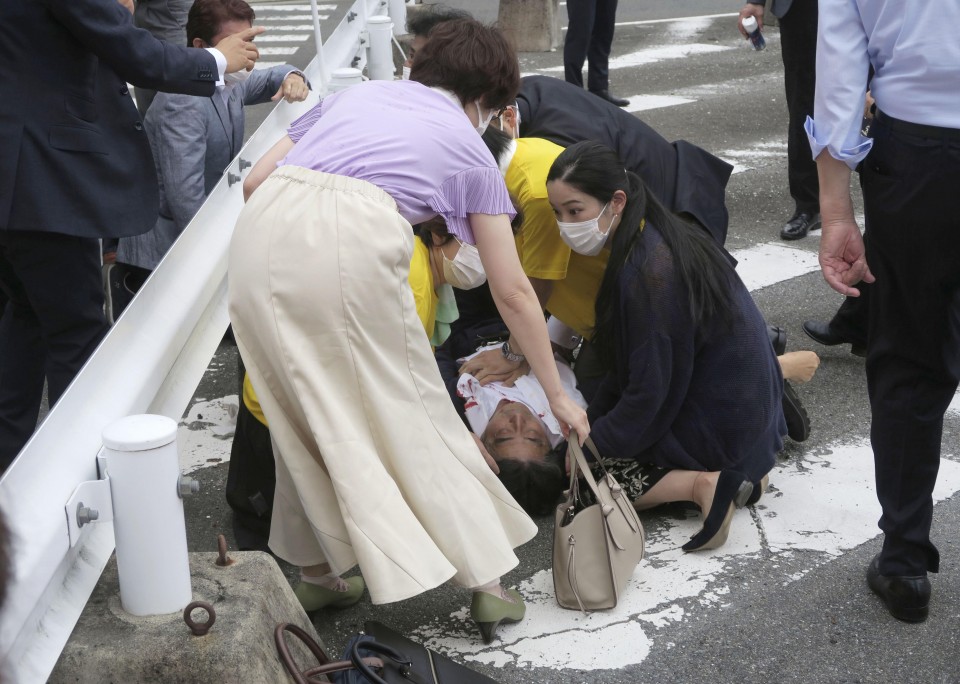 Former Japanese Prime Minister Shinzo Abe (C) lies on the ground on the side of a road after being shot by a gunman while delivering a stump speech in Nara, western Japan, on July 8, 2022, ahead of the July 10 House of Councillors election. (Kyodo)

The weapon made a noise that could be compared to an explosion and white smoke rose into the air after it was discharged. A gunpowder-like smell could be detected after the incident.

The weapon used by the attacker appeared to have its barrel wrapped with duct tape, the reporter said.

The Japanese government is still confirming Abe’s condition, with Chief Cabinet Secretary Hirokazu Matsuno telling reporters that any brutal act of violence should never be tolerated.

“We strongly condemn this,” the top government spokesman said.

According to the disaster management agency, Abe was also wounded and bleeding on the right side of his neck with internal bleeding confirmed in the left side of his chest. 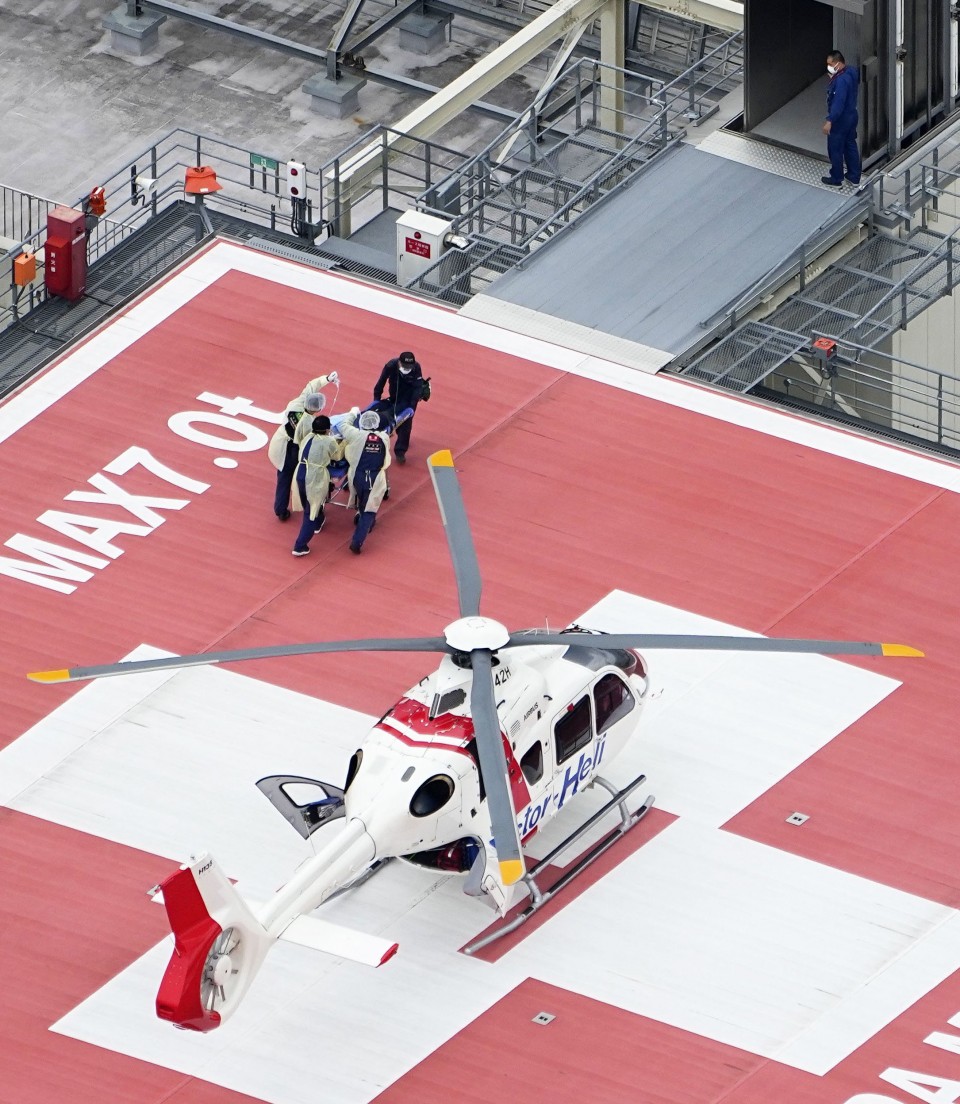 Prime Minister Fumio Kishida was rushed to his office in Tokyo by helicopter from Yamagata Prefecture where he was campaigning, and all Cabinet members have been asked to gather in the capital.

A hawkish conservative, Abe has made efforts to bolster the Japan-U.S. security alliance and raise Japan’s profile overseas.

U.S. Ambassador to Japan Rahm Emanuel said he is “saddened and shocked” by the shooting.

Born into a prominent political family, Abe served as a secretary for his father, former Foreign Minister Shintaro Abe, before being elected to the House of Representatives in 1993.

He had a short stint as prime minister between 2006 and 2007 before assuming the post again in 2012. He stepped down due to health problems after nearly eight years. 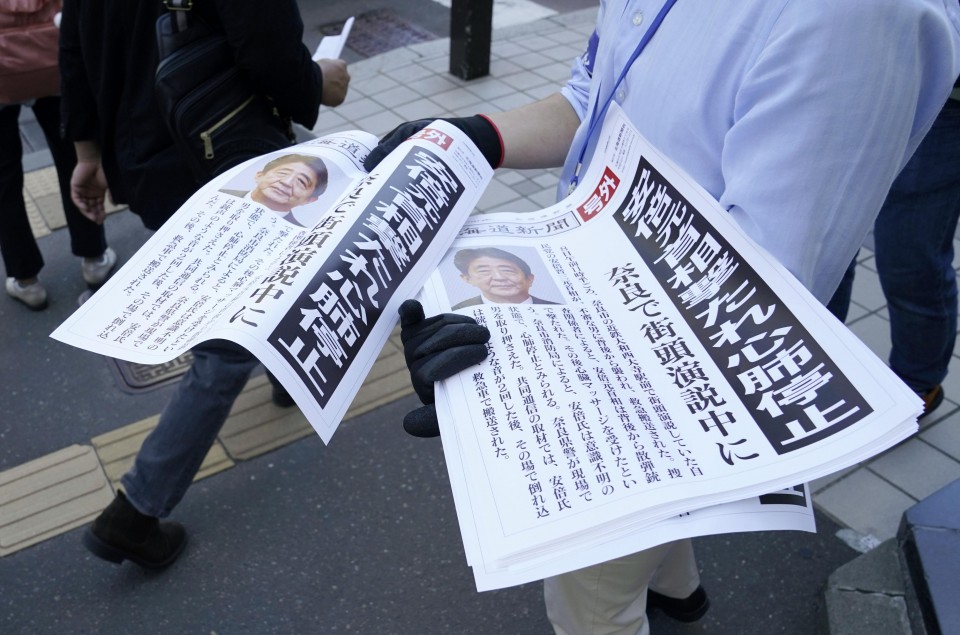 Copies of an extra edition of a newspaper is handed out to pedestrians in Sapporo, northern Japan, on July 8, 2022, after former Prime Minister Shinzo Abe was shot by a gunman while making a stump speech in Nara for the July 10 House of Councillors election. (Kyodo) ==Kyodo

During his second term as leader, he pursued economic policies marked by massive monetary easing, fiscal stimulus and structural reforms aimed at beating deflation and turning around the nation’s stagnant economy. He also pushed for reform of Japan’s U.S.-drafted pacifist Constitution.

In 2014, the Abe administration went ahead with a reinterpretation of the Constitution to enable the use of collective self-defense — defending allies even without an attack on Japan itself — and expanded the role of the Self-Defense Forces under new security legislation in 2016.